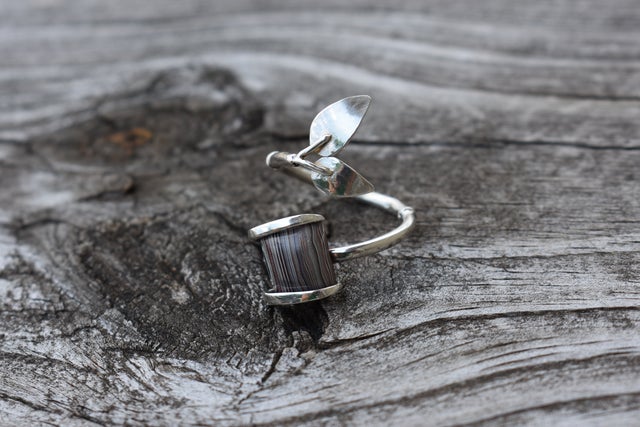 Handmade ring created with part of a vintage Sterling bamboo stem cocktail fork used as the band. Two leaves adorn one end and a cushion shaped Fordite cabochon is set in the tines at the other end of an open bypass band. Oxidized finish. This ring is about a 8.5/9 but is slightly adjustable due to its open band.

Fordite, or Motor City Agate, isn’t actually an agate or stone at all, but is vintage auto paint-the result of the build up of years of paint overspray on the vehicle transport racks. Legend has it that when the paint became too thick it was removed from the racks and some auto workers took pieces of it home and began carving it exposing the psychedelic swirls of different colors of paint. Originating in the Ford Motor Company, this material became known as Fordite though much of it comes from other car and motorcycle manufacturers. It is considered rare and collectible today since manufacturers no longer paint cars in this way. Each piece of Fordite is one of a kind.

Sold out
Add to Cart